Maggie Hayes (born Atlanta, 1989) is a soulful, sexual, energetic, cheerful, and at times angsty, beautiful force of nature who, after residencies at UGA, UCF, Temple University, and long stints in Costa Rica and New York, lives in what she feels finally comfortable calling Savannah at home.

The painter, sculptor and performance artist is a former competitive swimmer and athlete known locally as a vigorously twerking DJ who has performed regularly at the Thompson Hotel pool, Barrelhouse South and Rogue Water. She is also deeply spiritual with a consistent practice of writing, breathwork, meditation and yoga, which she often teaches to others.

Hayes’ artwork is deeply informed by her exploration of body-mind-spirit union. Often involving sculpture, beadwork, painting, installation and performance, Savannah’s art lovers will remember some of her incredible past shows: A two-week residency “Give Me My Flowers While I’m Still Here” at the dearly missed Welmont Space; “Coming Up For Air” in Haza (now the Stables); and last year’s beautiful installation focusing on ‘The Play of Light’ with her mother, ceramist Kathy Hayes, in the main gallery at Sulfur Studios.

Building on a 2019 Sulfur Studios ON::View residency where she sat in silent meditation and created an altar for viewers to share in her experience of “unconditional love that is tearing down the hierarchy of oppression,” Hayes had one Solo show at Day & Night Projects in Atlanta in April 2021. An integral part of this show, which included videos and paintings, was her seven-day meditation and fast.

“I wanted to garden my mind and cleanse my energy of anything that wasn’t loving,” says Hayes, “when we work towards the love within ourselves, we are much better able to integrate the outside world and face it without judgement see.”

On the fifth day, however, she really hit a wall.

“I’m sitting there worrying about my mum’s birthday and whether or not The Wyld is open and not having my phone to quench that itch creates this anxiety and spiral down me about other things wonder how much money I have. Very simple things caused such uneasiness. It is often like that. Whether or not we can stop the spiral is the effort of mindfulness practice.”

Hayes continues: “It was easier not to eat than not to talk on the phone for seven days! It’s such a double-edged blessing to have Google and this network of connectivity, but it feeds that anxious side of us so much.” Eventually, however, Hayes reached a point where she thought, “There’s really nothing to do and there is nowhere.” 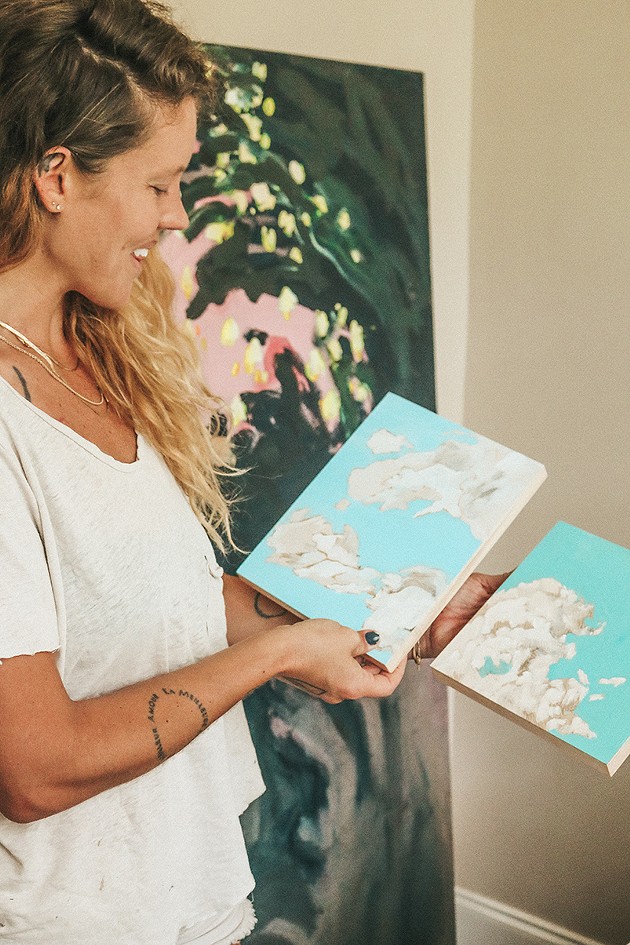 Maggie Hayes in her home studio.

Hayes’ show Nowhere To Go; Infinite Horror, Infinite Beauty” will be screened this Friday night (July 15) at the Rule of Three Gallery on Montgomery St.

Gallerist Stephanie Forbes told me she met Hayes years ago when they both worked in the Collins Quarter. “Anthony said, ‘You must be friends.'” Indeed, the women have striking similarities: both are beautiful, spiritual, and deeply devoted to their creative journeys.

“She’s never had a curator do all the work and install it for her. I am honored to be entrusted with this,” says Forbes. “Her work is so beautiful and dynamic, but she often puts so much into each show. I am happy to have the opportunity to split it up.”

“Nowhere To Go” focuses on the duality that exists between beauty and pain, struggle and ease. Hayes says she personally associates the tropical places of South America with paradise.

“I was so in love with the people and the culture of Costa Rica, and yet there is this extreme poverty and it is so often the case. These beautiful places are so badly affected by exploitation and colonization. How can we even count on that?”

“It’s so easy to focus on the darkness and not see that despite these oppressive systems, there’s still so much beauty,” Hayes continues. Some of her large abstract paintings are influenced by places of American intervention. One is based on a scene in a documentary about Vietnam where an idyllic palm-tree area “is being bombed and you see this flare and the twinkle of the bombs. Aesthetically, this destructive scene is bizarrely pretty.” The second is set in Hawaii and references the suppression of indigenous culture.

Sculptures of skull fragments and broken bones hang from a military parachute, raising questions about who benefits from foreign government aid, war, or colonization. Above the parachute are clouds that represent the ephemeral nature of the situation and inspire some hope that any negativity perceived is a temporary element. A series of small and affordable cloud paintings reinforces the concept that we are both a temporary and an eternal energy.

“When we’re truly in the flow of life, we’re in this constant state of change where there’s also a constant reuse of energy,” says Hayes.

A performance piece (date TBD) where the artist will be bound for an extended period of time will further advance the concept that there is no way to instead surrender and discover how we can become empowered when we embrace ourselves feel helpless.

Upon being diagnosed with cancer in February this year, Hayes recognized, “It was important to believe that I wasn’t powerless. I am in control of my attitude. I am in control of my thoughts. I don’t want to detract from anyone’s path, but for me I’ve come to the point where cancer doesn’t have to be good or bad, it’s just an experience…”

“…If I didn’t have the relationship with my mind and body that I have, I don’t know how I would have gotten through,” Hayes continues. “It was through this solidarity that I was able to thrive. One is tempted to say ‘why me?’ when certain things happen in our lives, but so often it’s ‘why NOT me?’ There is no kindness or healthy behavior that will protect you from grief, loss or pain. Likewise, this thought can be used for beautiful things. For example, when I went to Art Basel, I thought, “Why not me? I could be here!’”

The meditation breakthrough she experienced on day five of her show in Atlanta armored Hayes for the diagnosis and treatments that lay ahead and provided the inspiration for this new exhibit. Come – and let yourself be endlessly inspired.

The Thompson Hotel Sponsors Opening Reception for Maggie Hayes’ Nowhere To Go; Infinite Horror, Infinite Beauty” on Friday, July 15 from 6-9 p.m. at the Rule of Three Gallery, 915 Montgomery Street. The works will be installed by September 2, 2022. For show details and a date for the future performance piece, visit Instagram.com/ro3-gallery

Learn more about Hayes’ artwork, breathing exercises, yoga and DJ performances at Maggie-Hayes.com and on Instagram.com/ParadiseVitalityStudio