Launched with a bang in the form of a highly Instagrammable celebrity dinner party followed by what they call an exhibition opening ceremony, SKIN + MASKS: Decolonizing Art Beyond the Politics of Visibility is no ordinary gallery experience. First and foremost, it’s curated by multi-hyphenated Vic Mensa, a Grammy-nominated rapper, author, singer, visual artist, activist, and nominee for the NAACP Image Awards. Mensa is also the founder of SaveMoneySaveLife, a Chicago-based nonprofit that operates at the intersection of arts, entertainment and sustainable social change, advocating violence prevention and supporting youth arts programs in response to community needs. “For as long as I can remember, I’ve been an artist — I’ve drawn, sung, painted, rapped, whatever,” he says. “It’s my lifestyle, my way of expressing myself.” Mensa’s father is Ghanaian and his mother is American, and he grew up in the Hyde Park neighborhood of Chicago. There he recognized the social and racial differences that would shape his perspective, critical thinking, and future work. Which brings us here today.

Inspired by a seminal text by author Frantz Fanon, a French West Indian psychiatrist and political philosopher from the French colony of Martinique, which he uses as a basis, Mensa’s curatorial debut focused on the decolonization of black art beyond the politics of visibility. He brings together nearly thirty emerging and established artists, from Chicago to Los Angeles to Cape Town and to his native Ghana, which he believes is currently the center of visual arts in West Africa, to do just that.

Foster Sakyiamah embodies the spirit of a stylish Ghanaian woman through curved patterns in shades of pink. Troy Scat’s self-portrait features the artist’s wide smile, revealing a gold tooth and gold septum rings, complete with an unexpected touch of royalty: an Elizabethan ruffled collar. Elsewhere, Nikko Washington’s painting “Swing on ‘Em” depicts three blindfolded black men in boxing gloves fighting each other – a nod to a widespread racist spectacle in the South. Andrea Coleman’s digital paintings bring the past, present and future together through an otherworldly combination of color and form. In “A Lady from Roatan Always Makes Dinner Last,” Mia Lee shares the traditions, dreams, and memories she carries with her from her childhood and upbringing. Erol Scott Harris is literally part of “Piel 11.11” – he created the work by dipping his body in pigment and then pressing his flesh against strips of vinyl and linoleum, a process in which he repeatedly dragged himself over ropes and pulleys onto the painted surfaces lowered from the ceiling of his studio. Thelonious Stokes paints a post-mortem portrait of Emmett and Louis Till: Fourteen-year-old Emmett was lynched in the summer of 1955 by white men who said he had been flirting with a white woman. About a decade earlier, Louis was tried. 1945 in Italy while serving in the US Army for two counts of rape and one murder in a state of war and was executed by hanging. 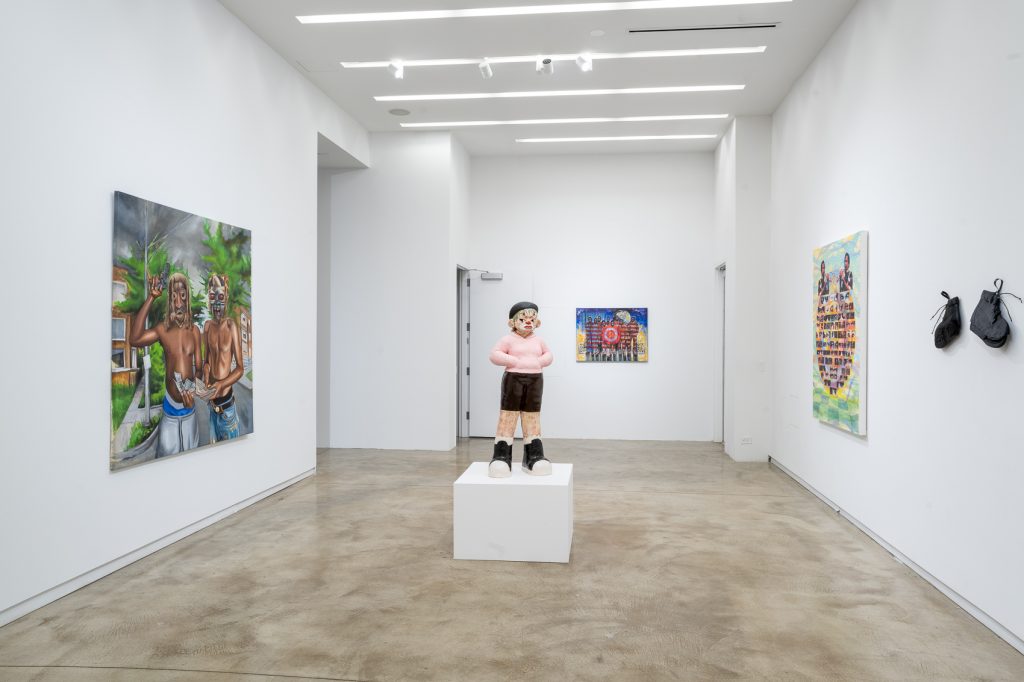 The stories delve into painful history, memories and the racial underpinnings of our reality – past and present. Darryl Westly’s 3D printed sculpture, a torn pair of boots, invites the viewer to reflect on the journey of someone who has struggled – perhaps a homeless person, a migrant worker or a refugee. Josie Love Roebuck uses mixed media such as fabric, oil pastels, screenprints, acrylics, yarn, dowel rods and buttons to create vignettes of her life. Some of her textile work even includes the hair bows she wore as a child. Elizabeth Sekyiamah’s colorful abstract figurative paintings capture the daily rituals of her life in Ghana. And the life-size head sculpt by Sydnie Jimenez stands there wildly – with clown make-up she casts an almost mocking look at the world. “I want to bring joy to an American society that’s built on white supremacy, so there’s nothing for you anywhere. I want these sculptures to be a place where we can find joy,” she says.

The gallery abounds with colour, the performance element abounds – from sonic experience designer Nova Zaii to AFRICOBRA’s Gerald Williams – and the exhibition, an intriguing mix of visuals, serves its purpose: to see, read and to stimulate thought. “The white man is sealed in his wisdom. The black man in his blackness,” Fanon writes in Black Skin, White Masks, which serves as a critique of the effects of racism, dehumanization, and colonialism on the human psyche. The two inevitably go hand in hand, but it doesn’t have to be that way. With “SKIN + MASKS”, Mensa and Fanon make it unmistakably clear: Black identity and experience must be freed from the point of view of the white gaze. Instead, it must be viewed from the perspective of individual realities. Only then and there do the obstacles to black progress begin to be dismantled, and racial equality and the prospects for change seem more attainable. (Vasia Rigou)

SKIN + MASKS: Decolonizing Art Beyond the Politics of Visibility is on view at the Kavi Gupta Gallery, 219 North Elizabeth until August 13.