In this era, it is the rare bird who masquerades as a communist and/or propagandist; While the former is anathema to conservatives, the latter raises concerns on the left of the political spectrum. But artist Anupam Roy proudly claims to be both. A member of the Indian Communist Party (Marxist-Leninist), Roy uses his artistic practice to question and spread ‘truth’, and his latest exhibition Broken Cogs in the Machine is an attempt in this direction.

The exhibition is a memory exercise for the contemporary, in which the artist records the course of socio-political relationships and the human experience of these transformations. Roy ironically reinvents the eponymous human cogs that serve as agents of disruption for the “machinic leviathan” of social organization through their collapse.

These disruptions and their potential for restoring social order are the central thesis of the show, which is currently on view at the Vadehra Art Gallery in New Delhi until August 5, 2022. Organized by the Foundation of Indian Contemporary Art (FICA) in collaboration with the Swiss Arts Council Pro Helvetia, the exhibition is the culmination of three years of work that followed Roy being awarded the 2018 FICA Emerging Artist Award.

In exhaustive breadth, the show strings together various media such as paintings, personal diaries, books, newsletters, and a TV installation to enable visual, textual, tactile, and aural encounters with subjective traces of historical processes.

Speak with The cable, Roy explains that following Antonio Gramsci’s recipe, he is concerned with compiling stories of our time into an inventory that is characterized by “an infinity of traces”. To this end, the artist mobilizes news reports, social media posts, photographs, poems, testimonies, linked quotes and personal items into fashionable narratives that counteract the bellicose rhetoric of our time.

“The state and right-wing forces in India are changing the socio-historical narrative and we only seem to be reacting to it. From my point of view, we need to stop and hold onto narratives of the everyday, accentuate them and assemble them into an inventory of collective memory,” says Roy.

Highlighting such stories and events is the mainstay of the exhibition, and a number of artworks reflect these engagements. In one of these works, an anthropomorphic mountaintop dismembers an earth mover with its large, muscular arms while human faces look on in the foreground. The facial expressions of all three elemental characters are twisted with an outraged agony, which is reflected in the work’s stormy atmosphere.

The first encounter with this and many other works on display is characterized by an affective charge that is inherent in both the subject and the form. Roy’s oeuvre is decidedly expressionist, using bold, monochromatic lines to connote and then deconstruct narratives of a ‘natural order’. Boundless jagged lines running wild on canvas and paper are used to illustrate the dialectic tension between what the artist calls “brokenness” and the throbbing impulse embedded within it.

While the aforementioned painting seems to visualize the violence being perpetrated by mega-corporations against mineral-rich ecosystems in states like Odisha, Jharkhand and Chhattisgarh, it also reimagines restoring balance through protest action.

The centrality of protest manifested in Roy’s work stems from years of involvement in grassroots activism and is often represented in his artwork by forms of resistance such as hammers and sickles and other agro-industrial implements, books, microphones and megaphones, calloused hands and feet, and outraged bodies and faces.

The artist repeats the parallelism of his studio practice and his political activism, but also reflects on the constant struggle between their formal and philosophical peculiarities. Steeped in the tradition of political/protest art as exemplified by artists such as Chittaprosad, Zainul Abedin and Somnath Hore, a significant portion of Roy’s work can be described as ‘protest ground art’.

Perfected at sites of street protests and university walls and halls, its expanse is central to creating an aesthetic of spectacle based on maximum visibility. This, according to the artist, stands in stark contrast to the art world’s understanding of Debord’s “spectacle” in which mediated culture becomes the key instrument of capitalist domination.

These two iterations of the spectacle could not be further apart, and some of Roy’s large murals suggest a preoccupation with the dialectical tension between these different spatial imaginations. A particular example is a painting of the Matua people, a predominantly agricultural and fishing community in West Bengal and Bangladesh. Inspired by the Matua movement, through this work the artist posits the history of the struggle for land as intertwined with the history of caste.

Crouched amidst the dense stemmed vegetation of the Bengal wetlands, these figures blend into their busy surroundings. The disorientation one feels in the face of this work is compounded by the limited space in which one can physically go back to get a comprehensive view of the work.

The distance that this visual experience requires and its absence in the gallery space is also reflected in the artist’s conceptual considerations. Through his work, Roy hopes to minimize the distance between his subjects and his own position as an artist. “I’m not part of this community, I have no direct connection to them. But art has the potential to blur that distance and illuminate its historical subjectivity.”

This impulse to ‘close the gap’ is perhaps most evident in the artist’s more intimate works, particularly his diaries, which are in themselves palimpsestious overlays of image, text, story and ‘truth’. Roy uses a variety of artifacts to tell personal stories that can sometimes be distant from his own place, but stand out in his work for their entanglement with broader social stories. 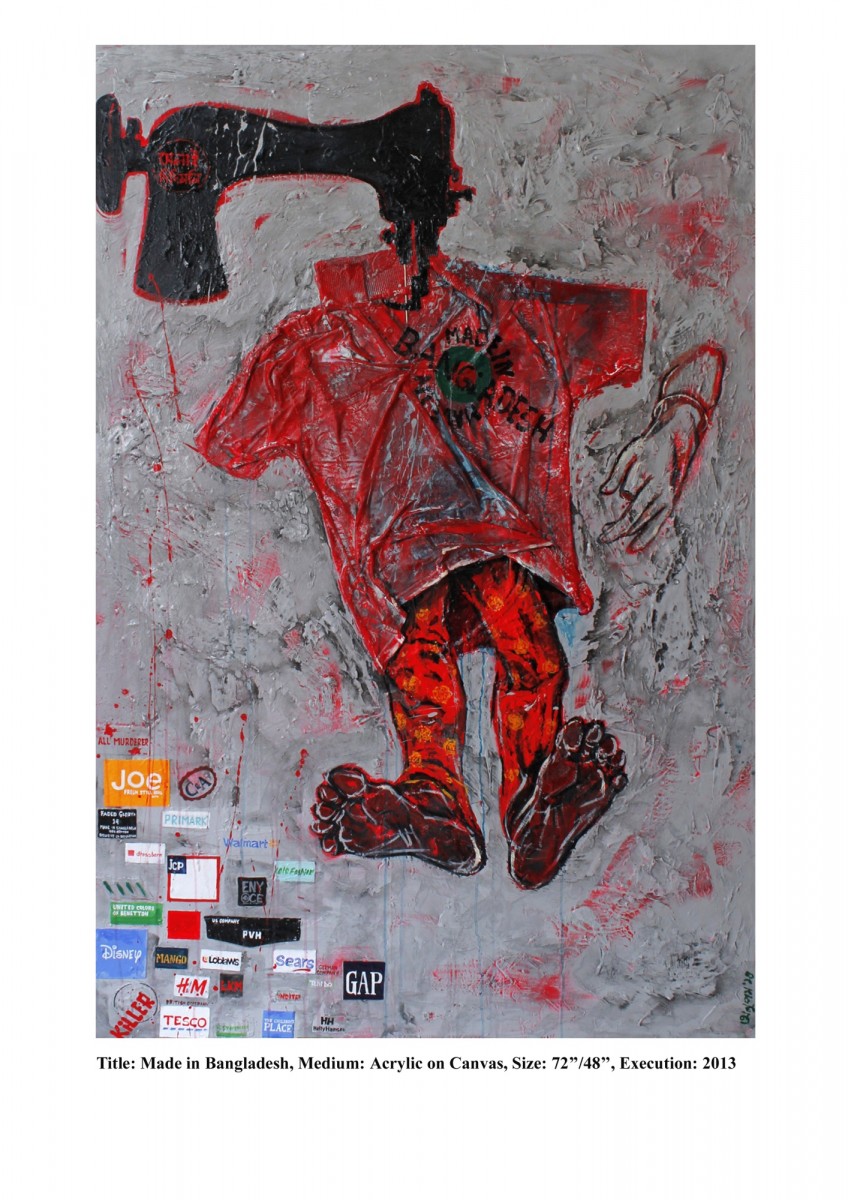 One such artifact is a moving testimony from Adivasi leader Sini Soy, who recounts the events leading up to the assassination of her 24-year-old son, Bhagwan, who died protesting the illegal acquisition and allocation of her land to Tata Steel in Kalinga Nagar protested , Odisha in January 2006. Another, a miniature work created after the Rana Plaza tragedy that claimed the lives of 1,132 garment factory workers in Dhaka in April 2013, uses a multi-layered overlay of images, symbols, text and metaphors to convey Neo /Blame colonialism – capitalist networks responsible for the maiming and death of thousands.

While such fragments of collective memory, along with hundreds of personal effects, allow Roy to grapple with a range of conceptual complexities, they also, by his own account, carry within them a precariousness that presupposes inarticulation. One work that illustrates this contradiction is a painting in a series focusing on mob lynchings and communal violence in India, including the 2020 Delhi riots.

Roy showed this author a widely circulated, low-resolution photo of Mohammad Akhlaq taken immediately after his lynching by Hindu mobs in Dadri, Uttar Pradesh in 2015. The artist uses this as a reference and tries to recreate it in oil – painting the blurred visual impression of the victim’s lifeless body.

“Each image has its own specificity and creates a certain sensation. But today we are surrounded by such images and have become accustomed to them. Unless I reveal that this is Akhlaq, the viewer cannot see it at all. It could be anyone – Naeem, Anis Khan, Junaid. We’ve seen this picture many times, but we don’t remember,” he claims. 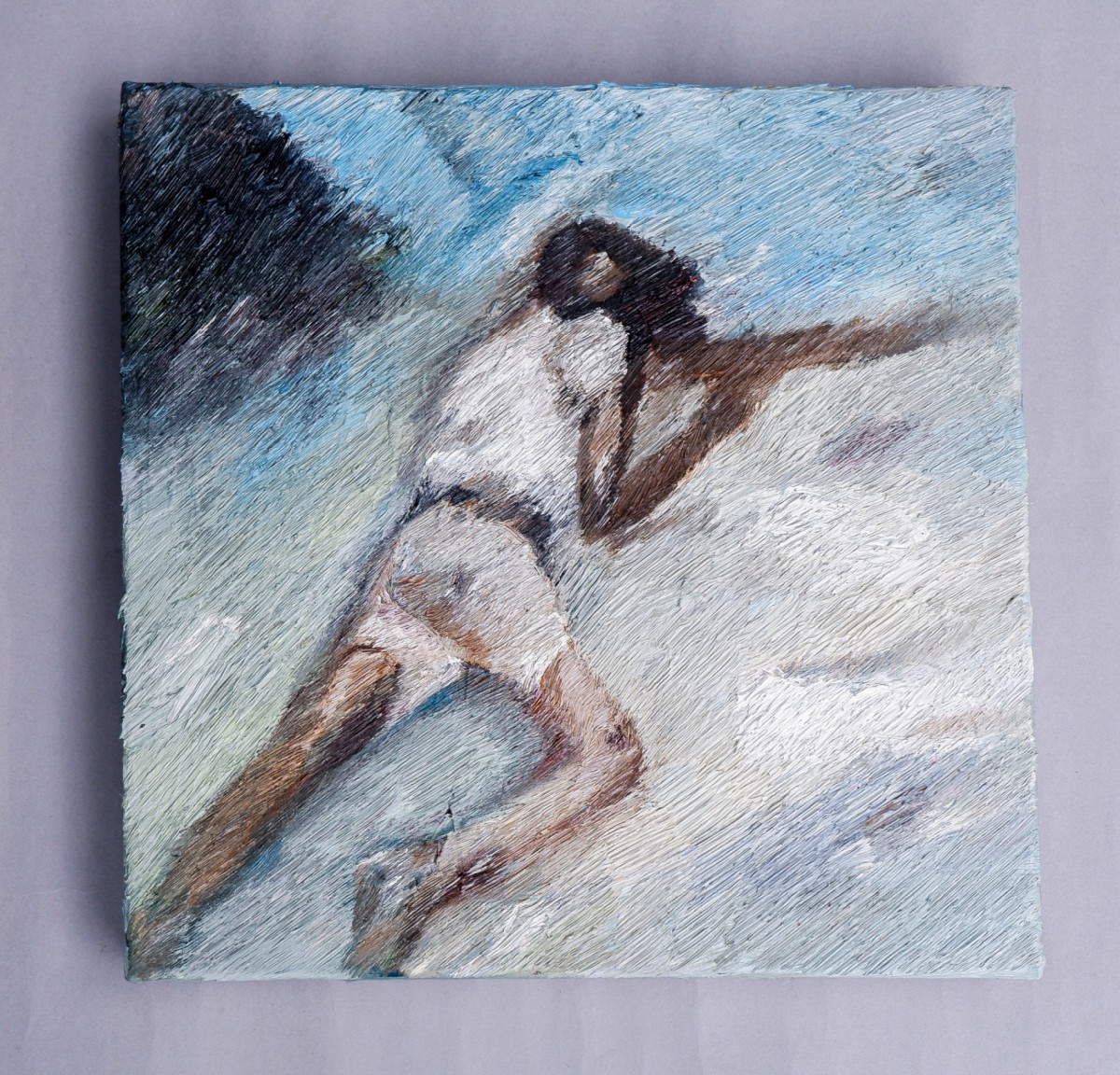 While for a viewer phantoms of photography flow into the painting, for Roy, like his other works, this image is restrained by what he calls the “impossibility of representation”. He explains: “Representation is a complex discourse inherent in artistic expression. But it is impossible for the artist to stand in the place of the subjects and speak for them. This gap is difficult to bridge.”

This inarticulation spills over into the sonic register, most notably in a certain section of the show’s only TV installation. This work, created in collaboration with Sudip Chakraborty, is conceived as a news broadcast combined with the artist’s visual works. In a segment of this newscast, Roy informs us, in a monotonous staccato, of the February 1999 shooting of 23-year-old Guinean student Amadou Diallo by four New York police officers who fired 41 shots at the victim. The artist intersperses this information with chorale lines (41 shots, 41 shots…) from Bruce Springsteen’s song American Skin (41 shots), Count to the number in the video and hammer home the dot in the audio track.

The incomprehensibility of the event and the inability to fully articulate its tragedy somewhat encapsulates the show’s conceptual thrust. But as already indicated, the subjectification of broken wheels and the willingness to deal with the inarticulate opens up possibilities to rethink social realities and artistic practices.

Roy’s individual work and her collective exhibition as a whole demonstrate a solid conceptual and creative foundation; it is hoped that these works will migrate back to the streets and protest sites, university walls and halls to revitalize encounters between art and people.

Pawanpreet Kaur is an independent journalist.