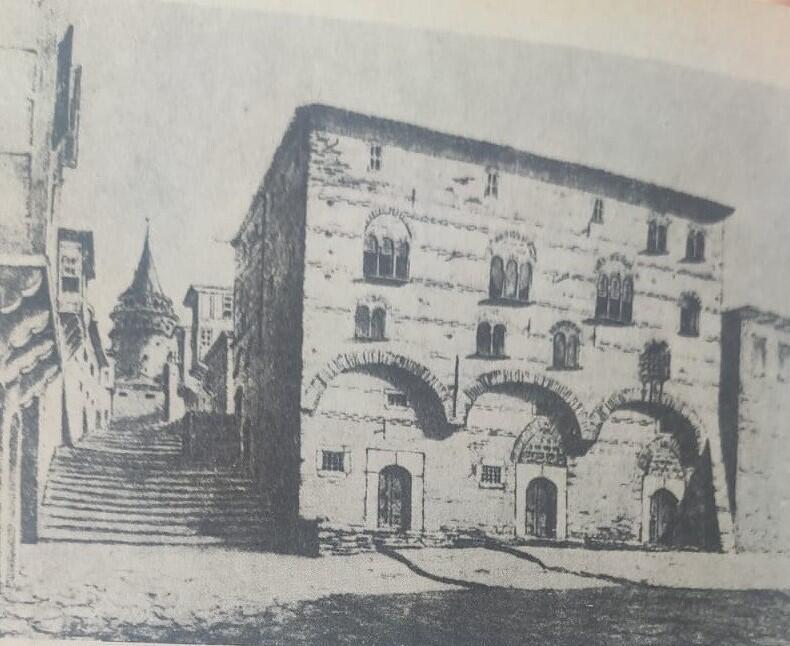 The Podesta Palace, built by the Genoese in Istanbul’s Galata in 1314, has been put up for sale for $7 million.

“The new buyer has to be someone who knows the true value of this building; must have an interest in culture, art and history. This is a world heritage,” said the palace’s owner, Nizam Hışım.

Art historian Hayri Fehmi Yılmaz said: “It is a very special structure that connects Turkey and Italy. If restored, it will probably be a great gift to our city.”

The Podesta Palace, built in 1314 as the palace of Montani de Marinis, ruler of the Genoese in Galata, was rebuilt in 1316 when it burned down in 1315. The facade of the building, partially rebuilt using the old building materials, was shortened by five meters in the 19th century due to zoning works.

The palace, which lost its magnificent facade, was bought 15 years ago by the President of Beyoğlu Beautification and Protection Association, Nizam Hışim. Parts of this palace, which is one of the most important buildings in Istanbul and features architecture from the 14th and 19th centuries, have become a target for thieves over time.

Hışım decided to sell the palace, whose Genoese coat of arms was stolen, for $7 million. The four-story palace with 220 square meters of floor space is now waiting for its new buyer.

Hışım stressed that Podesta Palace is one of the two rare buildings not only in Istanbul but in the world. “Unfortunately I am selling it due to our understanding of protection. We’ve been in court for 10 years so I’m fed up and selling it. The price is 7 million dollars. I don’t want to sell it. Buying such buildings, building a culture and arts center or building a museum and workshop will make a great contribution to the development of Beyoğlu,” he said.

$2 million for the restoration

Hışım said that parts of the building were stolen over time: “The building was burned down by thinners. The handrails inside were stolen. Finally they stole the very valuable Genoese Coat of Arms. While we can’t craft them in their original form, we will be able to replicate them as we make surveys and restitutions. Istanbul City Government sponsors and builds the facades of very beautiful buildings in Istanbul. It is possible to buy this place and build an Istanbul museum. $2 million has currently been spent to preserve its originality and restore its original form.”

Hışım explained that the new buyer of the Podesta Palace, which has been put up for sale for $7 million, should know its value, Hışım said: “The new buyer should know the true value of this building; should be interested in culture, art, history. He must love Istanbul. This is a World Heritage Site.”

Hayri Fehmi Yılmaz, Lecturer in Art History at Mimar Sinan Fine Arts University, said about the Podesta Palace: “This building is one of the most important examples of civil architecture, residential architecture and palace architecture in Istanbul.”

“Since the 13th century, Galata became a Genoese colony, and the palace of its ruler was called the Podesta Palace in this colony. A palace was built in the late 13th century, but we know that this palace burned down in 1315. It was renewed in 1316. They probably built this new building using part of the old building. In the Ottoman period it was used as a center where the affairs of the Genoese community were managed. Then this masonry turned into an inn. When the Ottoman Empire developed rapidly in the 19th century and tried to build wider streets in the city, Galata also fell victim to one of the development activities. The front of the palace was shortened by five meters. Unfortunately it has lost its old magnificent facade, but it is still very important for our city.”

Yılmaz said, “The main part of the current building, that is, the rear part, dates back to the 14th century. The front facade dates from the 19th century and was built in the 1870s. It is a very special structure that connects Turkey and Italy. As an inn it is privately owned but it would be very nice if it could be turned into a museum.”