On Saturday, the young trainees from Urban Art Exchange will show what they have created in the newly converted stables.

The City of Wilmington and CityFest Inc. will showcase their new Urban Artist Exchange and the work of their 21 teenage summer apprentices Saturday from 3:00 p.m. to 6:00 p.m

The open house coincides with Wilmington Open Streets and precedes a 6 p.m. story, drum and dance performance at the nearby amphitheater.

All events are free.

“Because we had a critical mass of people there, we decided to give them a chance to see what we envision on this site,” said Tina Betz, the city’s director of cultural affairs and fund development.

The Urban Artist Exchange at 1500 Walnut Street in Wilmington’s East Side Historic District is designed as a creative placemaking project that engages the community. It is near the Clifford Brown Listening Garden at 16th Street and Clifford Brown Walk 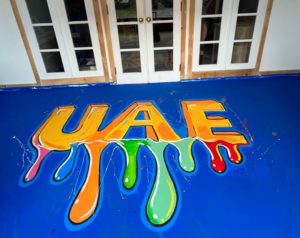 The exchange was carved out of the former Wilmington Police Department Mounted Patrol stablesa project that has been in the works for more than a decade.

The Open Streets program regularly closes a city street during the summer to encourage the community to socialize and use the streets for recreation.

On Saturday, July 23, the 16th Street Bridge and Jessup Street near the Artist Exchange will be closed.

Activities on the day include bike repairs and free bike rentals, as well as community service booths and a prize draw.

Traffic planners will also inform people about a temporarily painted roundabout at the intersection of 16th Street, Jessup Street and Pine Street, where traffic problems are common.

The temporary circle is intended to allow the neighborhood to see if the idea is working, and Wilmapco representatives will be there to hear feedback.

The street program also offers spray cans and bibs/aprons on site. Children and adults are invited to grab a can and contribute artwork to fill the circle.

On Saturday, July 23, the 16th Street Bridge and Jessup Street near the Artist Exchange will be closed.

Betz said the artist fair open date was chosen to coincide with the open road so more people would have a chance to see the young artist’s work. They are paid by Cityfest’s Arts Work program, which hires city youth for the summer.

Cityfest is a nonprofit organization that seeks sponsorships, grants, and donations to subsidize the city’s financial and human contributions. One of his areas of focus is improving the quality of life for Wilmington citizens, primarily through cultural and arts programs.

By the time Betz and other city officials became interested in remodeling the stables, the Urban Bike Project was working in a building on the property and had already conducted a capital campaign to renovate their building.

The city leased this building to the bike project and the stables and the rest of the property to Cityfest. The barn project was the first phase. The second phase includes the construction of the nearby amphitheater and its performance platform, and stormwater management.

“Five years ago, when we signed the agreement that created the Urban Artist Exchange,” Mayor Purzycki said, “tina and I envisioned a distinctive destination known for welcoming creative people and embracing the arts to transform the East Side physically, socially, and culturally.

“This beautiful space has already exceeded all expectations and we are just getting started. I encourage everyone to take a minute to visit this incredible place and see what we can achieve when we work together toward a common goal.”

The young trainees have each specialized in one form of fine art: painting, ceramics, textiles and fashion.

Ololade Olubowale, Joshua Prince-Ademusi and Omari Senior collaborate with Kim Canfield in the field of ceramics.

The stables are also rented out to a choreographer and a dancer who comes in to give lessons. Small artisans can rent a studio on a monthly basis. Three of the stables have been combined into one open common space, which was used for the closing performance of the city-sponsored Wilmington Black Storytelling Residency last weekend.

Saturday night’s program will feature stories from Wilmington’s TAHIRA and internationally renowned storyteller Charlotte Blake Alston on the stage adjacent to the Clifford Brown Listening Garden. Their family-friendly performance will consist of original stories rooted in the art of black storytelling and oral tradition.

Their performances are accompanied by African drumming and a dance performance by Pieces of a Dream Inc.

Participants are asked to bring a blanket or folding chair.

Betsy Price is a freelance writer based in Wilmington with 40 years of experience, including 15 years at The News Journal in Delaware.