The sounds of grinding, vibrating, buzzing and drilling may be welcome signs of progress and accomplishment for DIYers, woodworkers and professionals alike, but all that noise generated by our trusty power tools comes with some risk. Noise-induced hearing loss (NIHL) takes years to develop and affects approximately 40 million US adults ages 20 to 69, according to the Centers for Disease Control. For these adults, voices begin to sound like murmurs, and higher pitched sounds become difficult to hear.

The damage can be caused by a single extremely loud event or by a cluster of lower level events. When we hear sound, tiny bones in the ear and eardrum vibrate, and these in turn vibrate tiny hair cells called cilia in the inner ear. Over time, loud noises can permanently damage the cilia.

Unlike other engineering measurements, sound is measured on a logarithmic scale of decibels (dBA). A 10 decibel increase is 10 times more intense, which humans perceive as twice as loud. However, a change from 60 dBA to 120 dBA is actually 1 million times more intense, but we find it 64 times louder. For reference, 0 dBA is the hearing threshold, a normal conversation is around 60 dBA, a construction site is usually around 100 dBA, and 140 dBA is the human pain threshold.

Read on for a list of some of the noisiest power tools commonly found in a workshop, along with quieter alternatives to help reduce noise. 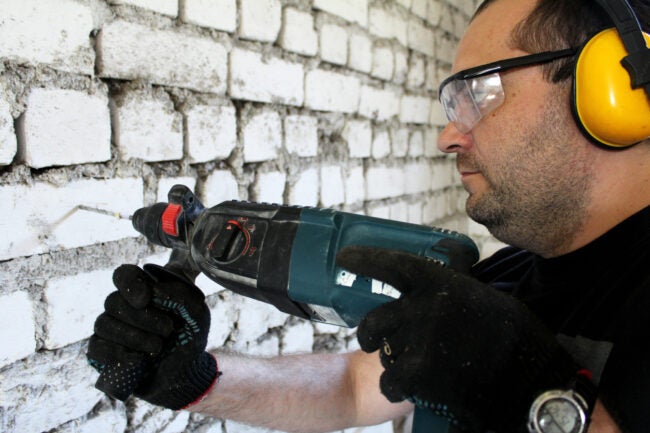 A hammer drill is an ideal tool for drilling holes and drilling into hard materials such as concrete, stone, and brick. Because the tool is used for heavy-duty work, it’s also one of the noisiest tools in a handyman’s arsenal. The loudest rotary hammers can reach up to 116 dBA, but on average the noise level of a rotary hammer is at least 105 dBA.

Quieter alternative: Among hammer drills, brushless versions like the Milwaukee M18 hammer drill — a favorite in our researched guide to the best hammer drills — tend to be quieter. 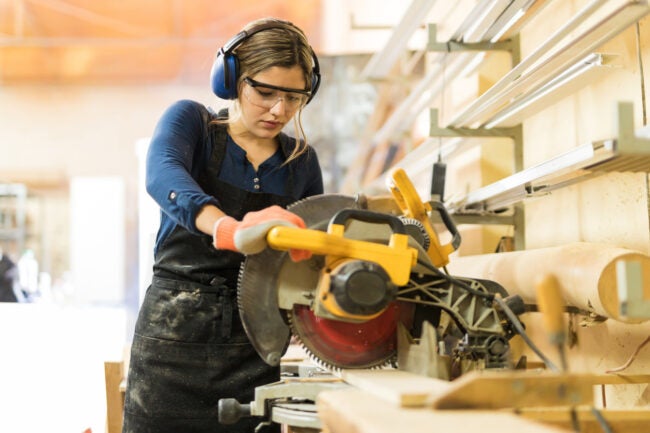 Circular saws are handy and portable, ideal for quick cuts of dimensional lumber and sheet material. However, their motors are often noisier than other shop saws such as table saws because they use a different type of motor. Unlike table saws, which typically use a belt drive and induction motor, circular saws rely on a universal motor that a vacuum cleaner uses. Circular saws typically produce around 108 dBA, but hard material and a dull saw blade can generate even more noise. 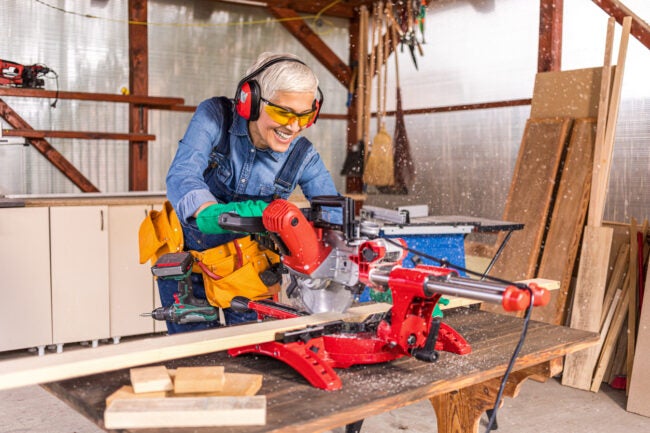 A miter saw is usually a cornerstone of the do-it-yourself workshop alongside the table saw. Used chop saws are used for cutting dimensional lumber and can cut miters, bevels, and wider boards. They run like circular saws with a universal motor, so they tend to be noisy. When NIOSH tested the noise levels of 200 tools, the loudest miter saw was 113 dBA. While noise is to be expected, if your miter saw makes a new grinding or squeaking noise, it is a sign that the tool’s brushes or armature need repair.

Quieter alternative: One of the quietest saws on the market, this Bosch miter saw is a favorite in our researched guide to the best miters. 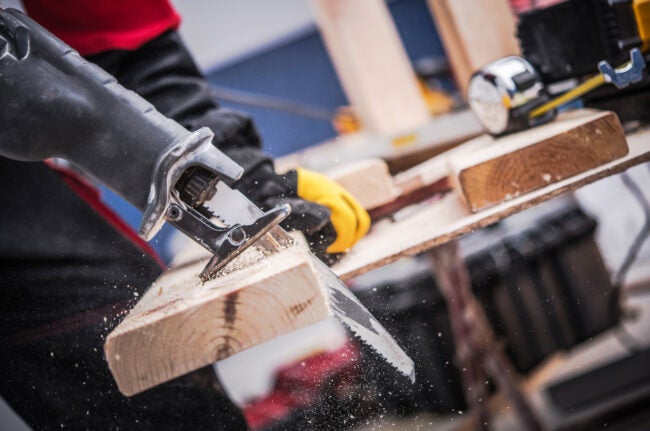 A popular demolition tool, the saber saw can cut through wood and metal. They’re not as precise as other saws, but they’re powerful and come in both corded and cordless versions. Typically around 106dBA, they can be as loud as 112dBA, and cutting through metal makes them louder.

Quieter alternative: For a quieter option, look for a brushless motor reciprocating saw like the Milwaukee 2821-20 M18 Brushless Cordless SAWZALL Reciprocating Saw, the newer version of our top pick in our researched guide to the best reciprocating saws. 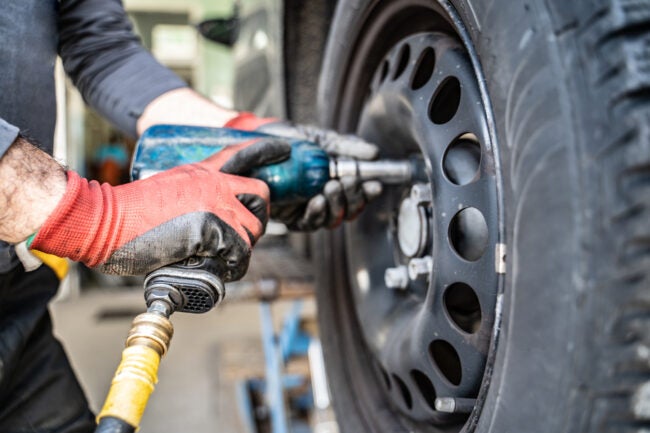 Heavy-duty impact wrenches are valued for their ability to loosen tight nuts and bolts. Where they once required the noisy company of a compressor, cordless versions offer a quieter option that’s easier to set up and transport. But even without a compressor, they can still be as loud as 111 dBA.

Quieter alternative: For less noise, consider a brushless version like this Makita 18V Cordless Impact Wrench, a favorite in our researched guide to the best impact wrenches. 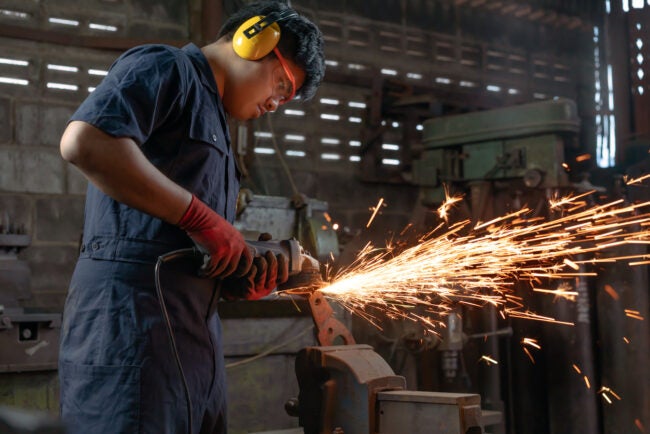 Any tool with the word “grinder” in its name can be noisy, and an angle grinder is no exception. This grinder is used to cut metal, tile, and wood, and its motor spins a disc with a grinding edge, making it a must-have for tough jobs. It can be as loud as 109 dBA, which is like a rock concert, and cutting metal or other hard material can increase the sound level even more. The good news is that there are models that are quieter.

Quieter alternative: Using a low-noise grinding wheel and a smaller grinder like the Makita 18V LXT Brushless 5-inch Angle Grinder, a favorite in our researched guide to the best angle grinders, can reduce levels by 10 dBA. 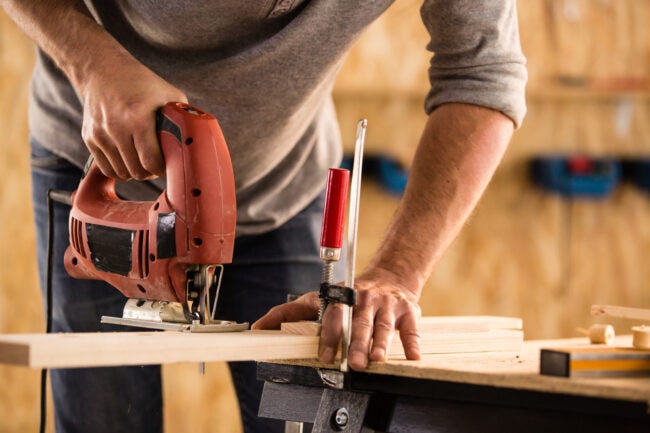 Used for plunge cuts, creating curves or holes, and trimming lumber, a jigsaw is a portable and versatile tool. When properly maintained, a jigsaw produces about 100 dBA, which is equivalent to the noise level of a hair dryer or a gas-powered lawnmower. If you hear a squeaking noise or a new grinding noise, the bearings, gears, or carbon brushes may need some attention.

Quieter alternative: For a quieter option, look for a brushless, soft-start version like the Milwaukee M18 Jigsaw, a favorite in our researched guide to the best jigsaws. 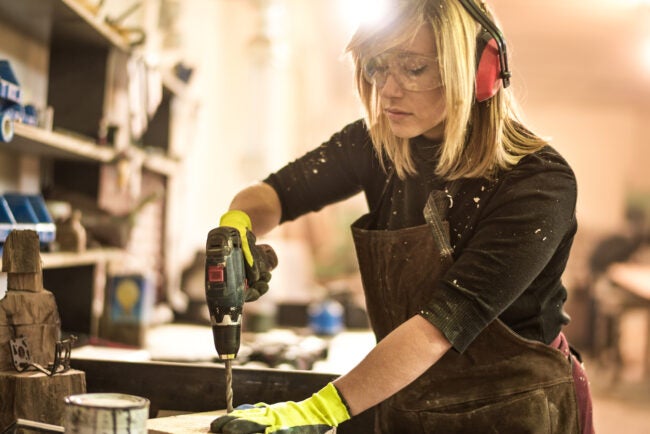 One of the most common tools in a homeowner’s collection, the drill bit is used to create holes with countersinks, auger bits, and shovels, and to fasten screws. Drill bits are available in a range of power, torque and run times, and factors such as a drill’s speed and the type of material being drilled through can affect the amount of noise produced.

Quieter alternatives: Because there’s less friction, brushless drills like the DeWalt 20V Max Drill, a favorite in our researched guide to the best cordless drills, tend to be quieter. Another contender, the Milwaukee M18 drill bit, has a brushless motor and uses a hydraulic oil drive, resulting in less vibration and 50 percent less noise.

TIED TOGETHER: How to use a drill 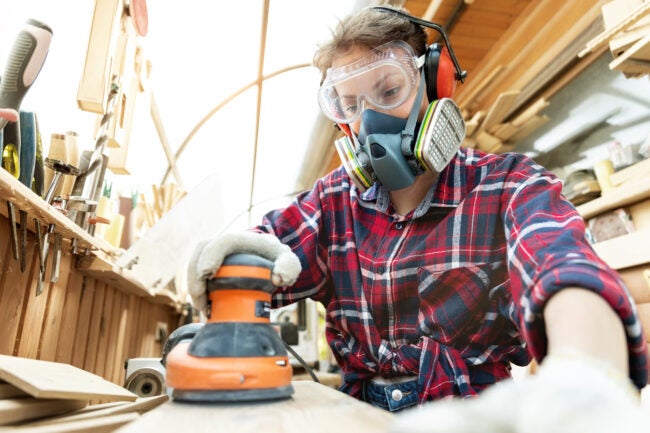 A random orbital sander’s disc spins while moving in small ellipses to remove material from a surface. It is a particularly useful tool when the grain of a wood does not run in just one direction. The random rotation of the grinder also helps reduce the chance of leaving grinding marks. Too much pressure when using a random orbit sander can increase noise levels as it increases friction and makes the tool work even harder. 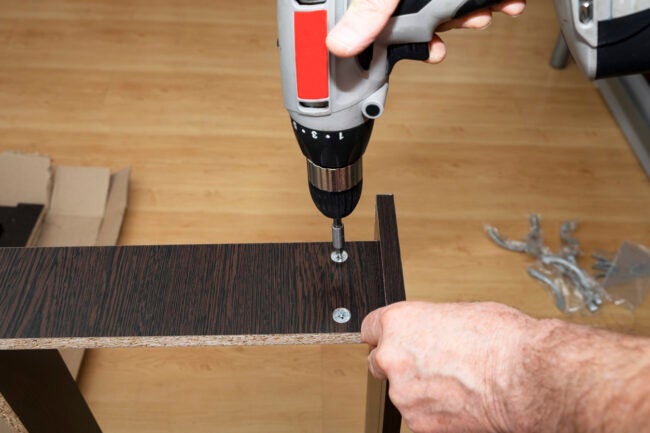 Handy to keep in the workshop or in the kitchen drawer, the cordless screwdriver is usually much smaller and lighter than a drill. It fits into tighter spaces and is often used to hang wall art or fix small things around the house. The speed, torque and type of material can affect the noise level of the tool.