As a young boy, UNE associate professor George Weisz’s family home was often flooded with the sounds of classical and operatic music. This early introduction to the arts at a time of great fortune had a profound and lasting impact on George even as he embarked on a path into medicine.

Never lacking in determination, George – who is now a member of UNE’s School of Humanities, Arts and Social Sciences – thrived against all odds. As a highly educated Jewish family in Romania, George and his family suffered greatly under two totalitarian regimes since George was just four years old. His father disappeared for four years during World War II, was sent to do forced labor in the forest, and eventually reappeared broken and ill at the end of the war. Forced to flee and start over, George found little solace in school – where he was relegated to the “ghetto bench” at the back.

But smart and ambitious, George refused to give up his ambitions. Despite all the difficulties and obstacles, he became a surgeon – a dream he had since he was about 10 years old. His love of art hummed in the background, but work as a spine surgeon and orthopedist was all-encompassing.

It was only when retirement was in sight that George was finally able to satisfy his artistic interest.

From medicine to art

“About 30 years ago, in my fifties, I thought, what am I going to do? I don’t play golf, I don’t play cards, I don’t go to the pub,” says George. “From my youth I was very interested in art – music, painting and opera, so in my early fifties I enrolled in a Bachelor of Arts degree in European Studies at the University of NSW. That was so exciting for me!”

I responded to Randall’s ad in the UNSW general program medical history teachers’ newspaper and it just clicked. We became really good friends.

Fearing the looming “intellectual vacuum” upon completion of this degree, he quickly enrolled 3.5 years later in a Master of Arts – Renaissance Studies at Sydney University, a subject that “got hooked” on him.

His journey into the arts at UNSW also sparked a lifelong collaboration and deep friendship with historian Professor Randall Albury, also an Associate Fellow at UNE’s School of Humanities, Arts, Social Sciences.

“I responded to Randall’s ad in the UNSW general program medical history teachers’ newspaper and it just clicked. We became really good friends. He’s a phenomenal gentleman. His mind is phenomenal, he has a lot of knowledge in art and history. He’s the nicest guy you can imagine and he’s always helping others,” says George.

While immersing himself in Renaissance art, it wasn’t long before George’s eye stepped in as a surgeon and he began seeing some of the world’s most beloved and famous paintings in new ways.

“One day I was looking at one of the paintings and noticed a hand deformity. I pointed to Randall and said, ‘Look, look at the hand – what’s that?’ And he was just as bright as me!”

Suddenly their interests intersected, sparking a prolific and unique publication. 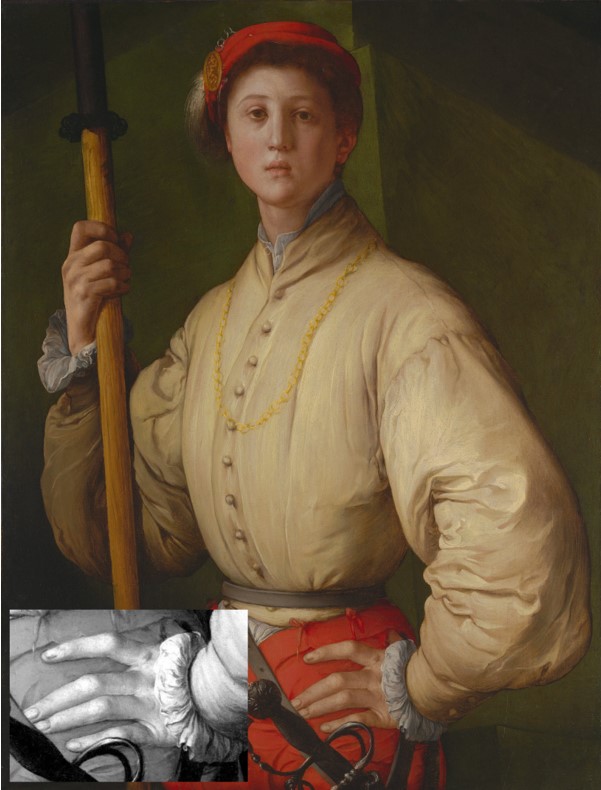 Together they have researched and authored nearly 50 articles – with more to come – on many dozens of paintings from the Renaissance to the Impressionist art movements in Europe, documenting a range of deformities, either intentionally or accidentally included.

It is a specialization that requires a careful study of paintings and a solid and very specific knowledge of the artists and the time in which they produced their works to distinguish a possible artistic distortion from a genuine deformity depicted.

“It’s a fascinating subject, but apart from that it gives us some retrospective information about the medical problems that existed 400 to 500 years ago,” says George.

Some papers are studies of specific musculoskeletal deformities depicted in individuals of a specific era and painting style, others are family studies.

There are a number of documents about the family that ruled Florence and then Tuscany for 300 years, the Medici family. Plagued by an illness then thought to be gout, paintings of the family tell a different story that fits the conclusions drawn from examination of exhumed remains: they had very specific congenital malformations of the spine, hands, and bones.

One day I was looking at one of the paintings and noticed a hand deformity. I pointed to Randall and said, ‘Look, look at the hand – what’s that?’ And he was lit like me!

There is a study of arthritis in adolescents that is depicted in some paintings in the European Biedermeier style from the first half of the 19th century, a style known for its devotion to realism and therefore less likely to represent an artistic flowering.

George and Randall even used their expertise to help solve one of the hotly debated and longstanding mysteries of Renaissance art. Upon close examination, their assessment of a hand anomaly lends weight to the view that Jacopo Pontormo’s Portrait of a Halberdier, painted sometime around the mid-16th century, depicts a young Duke (later Grand Duke) Cosimo I de’ Medici rather than the Florentine noblewoman Francesco Guardi, as others claim.

They found that while the subject’s hand pose was typical of many Renaissance portraits, the position of the finger joints could not be similarly explained stylistically. And the particular anomaly of the joints matched other recognized portraits of the duke, as well as his skeletal remains.

How real is realism?

Realism in art cannot be taken for granted, and George and Randall also document the shift in artistic trends from a commitment to realism to ’embellishment’ in Renaissance paintings, including the works of the likes of Raphael, Botticelli and da Vinci.

“By the first quarter of the 15th century, almost 100 percent of the paintings from that period, at least 95 to 97 percent, were perfect in anatomical design,” says George. “Then everything suddenly went haywire. People started wanting to depict various deformities, especially to beautify the hand. Both men and women were shown with their fingers in exaggerated positions that were probably considered elegant at the time, but could only occur as a pathological condition on a real hand. All paintings begin to depict these hand deformities, whether accidental or intentional. This trend tapers off and returns to normal by 1620.”

George says that Renaissance sculpture is even more dependable for realism than painting, and none meet the perfect standards set by Michelangelo.

“The man was absolutely perfect,” says George. “In Michelangelo’s sculptures there is not a single, even weak, deformation. But if you go back to others much less ingenious than Michelangelo, you’ll find things like a little twist on the hand, but you have to look at it with medical eyes to see that something is shorter on the right, or different on the left.”

The double whammy of the onset of the COVID-19 pandemic and George’s complete retirement from medical practice was a difficult time for George, who also lamented the lack of opportunity to spend time with Randall.

But George says his interest in art history for reading, writing and publishing “saved” him during this difficult time. Overall, his studies have revived the joy he felt as music shaped his early years in Romania.

“I have absolutely achieved what I set out to do in retirement. It’s a beautiful subject, fascinating.”

Image in text: Portrait of a halberd by Jacopo Pontormo, painted 1529-1530 or 1537, public domain, via Wikimedia Commons. Inset: close-up of subject’s left hand.

/Public release. This material from the original organization/author(s) may be post-date in nature and may be edited for clarity, style and length. The views and opinions expressed are those of the author(s).