HONG KONG, August 10, 2022 /PRNewswire/ — Hysan Development Company Limited (Hysan) has been extremely proactive in engaging and connecting with local communities, exploring opportunities and promoting sustainability. Community members participate in co-creation projects to gather ideas for creating a collaborative community. gLEEful Rooftop is Hysan’s latest initiative to bring something special to the community. In collaboration with acclaimed local design house One Bite Design Studio, eight rooftops in Lee Gardens, Causeway Bay will be revitalized and energized to showcase the fusion of old and new, with a worthy aim of passing on the city’s unique rooftop culture and the to promote diversity.

Under the motto “Kids Fun”, the gLEEful Rooftop captivates the community with the childhood games they grew up with, such as “What’s the Time Mr. Wolf”, childhood games from different times are recreated on the rooftops.

Placemaking to connect the community

gLEEful Rooftop is a collaboration between Hysan and the award-winning One Bite Design Studio. The six-strong project team led by architect Alan Cheung completed the project in eight months. In the initial phase of the project, members of the local community were involved in the form of a survey to express their ideas and thoughts about the community. A giant QR code with a link to the survey was placed on one of the eight revitalized rooftops to encourage participation. “Placemaking is the merging of architecture and design into a community, which can be achieved by exploring the different possibilities of the common space and connecting the space with community members who are not only stakeholders but also an important source of ideas. If you want to come up with a design that the community can relate to, you first have to understand your people,” says Alan.

Replicating the fifth facade and passing on the roof culture

In the eyes of the architects, the roof surface as the “fifth façade” has enormous potential. “gLEEful Rooftop” is a good example for the public of how such potential can be used to strengthen the connection to the area and promote diversity. “People seldom think of using the roof space – the fifth facade – which, if used wisely and creatively, can be transformed into a beautiful urban space,” says Alan, adding that roofs are more than a communal space, they are a place where memories are made. where the interaction between people and architecture takes place and where culture is passed on from generation to generation.

Under the motto “Kids Fun”, the gLEEful umbrella engages the community with the childhood games they grew up with such as: “Hopscotch”, “red light, Green Light, Wall Art, What’s the Time Mr. Wolf, Hawks Catching Chickens (a local catch game), Paper Airplanes, Plastic Soccer Balls and more. “Childhood games from different times are re-enacted on the roofs. We use playful and colorful designs to appeal to the young while the games bring back memories of the young at heart. You would really feel part of the community through these artistic interactions.” explains Allan. The project not only adds an artistic ambiance but also another layer of diversity to the community, encouraging members to use the attic space as a “bridge” to connect people of all ages and walks of life. 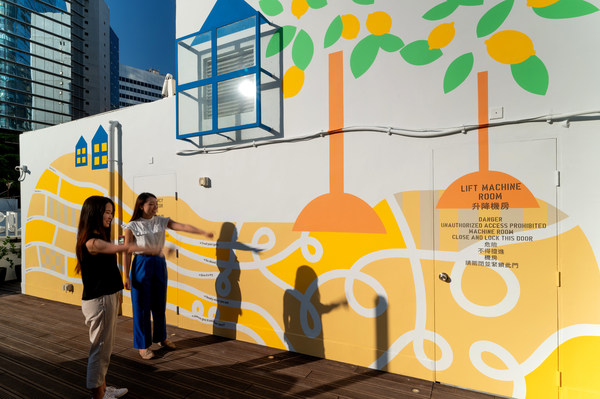 The project brings not only an artistic ambience to the community, but also another layer of diversity, encouraging members to use the attic space as a ‘bridge’ to connect people of all ages and walks of life.

Enjoy the upcoming diverse events on the roofs

Hysan believes the revitalization of the eight rooftops will create more opportunity and promote sustainability in the Lee Gardens community. To that end, a range of events and programs will be held starting this month, including music shows, sports and movement workshops, mindfulness and meditation activities, community photography, arts and cultural events. By engaging stakeholders in the community, bonding and interaction are strengthened.