I have one somewhere, a rudimentary dog-eared photocopy announcing that “Gustav Metzger is calling on all creative professionals and students to create a worldwide movement in the arts to avert extinction.” Anyone unfamiliar with the history of the seminal auto-destructive Art Symposium of 1965, when Metzger burned his own paintings with a blowtorch, would have wondered who the heck is Gustav Metzger and not “working for the environment” all very dignified but just a little boring?

Well, of course, that’s exactly what we’re all supposed to be doing. Metzger’s reputation as a visionary activist artist has steadily increased since his death in 2017. In fact, today he is probably the most relevant and up-to-date artist of our time: a refugee who came to Great Britain on a Kindertransport in 1939, whose life embodies the great zeitgeist themes of migration and expulsion; an anti-capitalist who refused to be represented by a commercial gallery (although ironically his estate resides with global big player Hauser & Wirth) and who invented the entire concept of Extinction Rebellion decades before the event.

I am now standing amongst exquisite gardens in a remote part of West Cornwall, looking at a used station wagon with a large perspex box bolted to the roof and a brown and obviously dead plant inside. A hose looped over the back of the vehicle directs its exhaust emissions into the box so it kills its cargo (a griselinia littoralis, I’m told) while it’s moving. Parked among the swaying, meadow-like flowerbeds that surround the Kestle Barton Gallery, it is a bleak and dead monument to the automobile age and the inherent destructive abilities of the horseless carriage.

First created in 1970, Metzger’s Mobile has embodied in many forms over the decades, including as part of a gigantic installation at the 2007 Sharjah Biennial (screened in the exhibition) in which 100 cars pumped their emissions into a giant cuboid tent. Manufactured especially for this exhibition under the supervision of Metzger’s estate, this version was driven to various prominent locations in West Cornwall in the weeks leading up to the opening of the exhibition, including St Ives Harbor and Penzance’s Jubilee Pool, to bring Metzger’s environmental message to the public. hammered holiday crowds.

However, “environment” was an ambivalent term for Metzger, a distorted version of his great obsession with “nature” that had been hijacked by “the forces that manipulate the world” – the capitalist West – to “help sustain profits and power “; although he conceded that the communist bloc had further misbalanced the “interdependent forces of destruction and creation.”

In the gallery, a young tree—it looks like a cherry—is tucked into a concrete block, its slender trunk topped by a mass of severed roots that jut into the ceiling rafters. Entitled “Kicking Tree / Flailing Tree” (Picture right) it simultaneously alludes to the trauma of Metzger’s uprooted youth and the violence our eco-killing society inflicts on trees. I was less impressed by the sense of fear of nature than by the economical and elegant monumentality of the work and the ecological way of its realization. This recreation of an original 2010 work was made on site according to Metzger’s instructions. If all exhibitions were set up this way, it would save galleries endless millions in transportation costs and entire forests’ worth of CO2 emissions.

The central work “Mass Media: Today and Yesterday” (1971/2009) is an almost space-filling stack of old newspapers in carrier bags (picture below), forming a kind of monumental pedestal that supports nothing but the weight of the story embodied in the torrent of words that flood thousands of pages. If it seems like an excellent recycling opportunity (although you may struggle to amass that tonnage of material in these post-print times), this is Metzger’s own collection of papers from yesteryear, carefully arranged by the curators around a snapshot in time to create a historic moment around the millennium. It’s reminiscent of a time when the smooth cheeks of David Beckham and Tony Blair seemed interchangeable, and those of Olafur Eliasson weather project watched the sun rise at the Tate Modern just as the Twin Towers burst into flames. The fact that those final events were three years apart feels like just a detail in this tactile-cerebral read of history. In a participatory element established by Metzger, visitors have collaged new newspapers across the surrounding walls and satirized current events from the Tory leadership contest to Gary Linneker’s ‘menopausal hot flashes’. 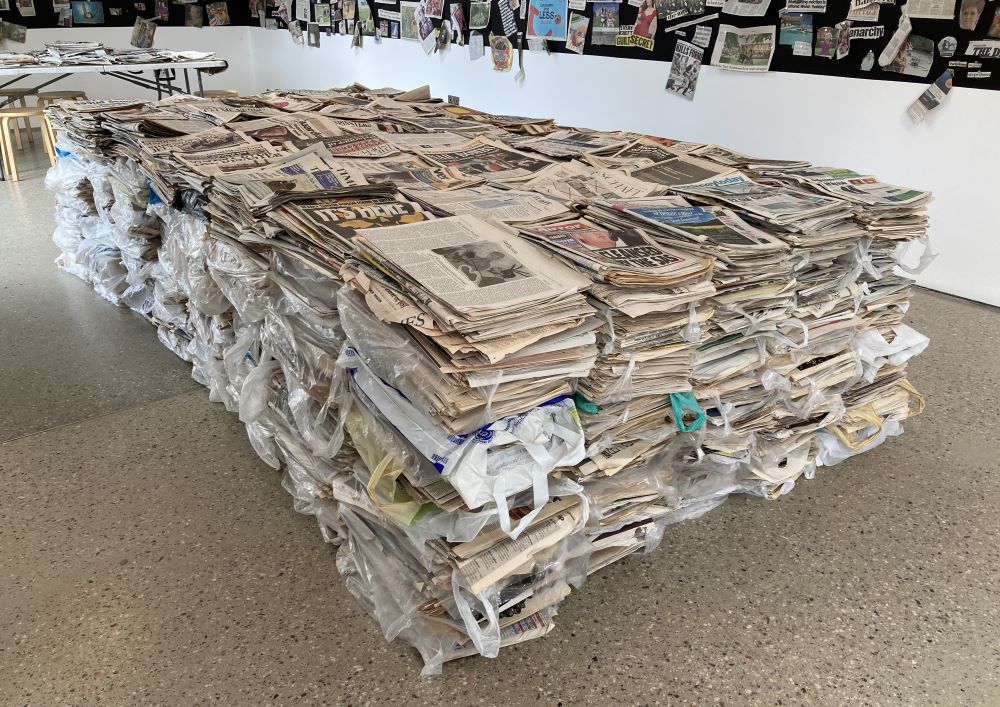 It is worth visiting this small but revealing exhibition. It made me hungry for a full overview of this fascinating and highly idiosyncratic artist: a proper retrospective, bringing together Metzger’s many aspects and identities, from the teenage student who spectacularly fell out with David Bomberg, his teacher at Borough Polytechnic in the early 1950’s, up until Metzger himself as a teacher who inspired Pete Townshend, his student at Ealing School of Art, to smash his guitar on stage with The Who; from the Dadaist painter and part-time antique dealer who lived in Kings Lynn in the 1950s to the psychedelic showman who created groundbreaking light shows for Cream.

This exhibition is undoubtedly already in preparation. Meanwhile, Kestle Barton’s immaculately tasteful rooms, tucked away among the creeks and manicured villages of the Lizard Peninsula, prove a surprisingly appropriate place to engage with an artist who doesn’t shy away from exploring the darker, dirtier aspects of life investigate. Standing on the gallery with the doors open, you can smell the timeless processes of growth and decay emanating from the surrounding hedges with their swarming butterflies. This may be a beautiful nature, rather than a raw and brutalized nature, but it is no less a valid framework to respond to Metzger’s classic call to remember nature.